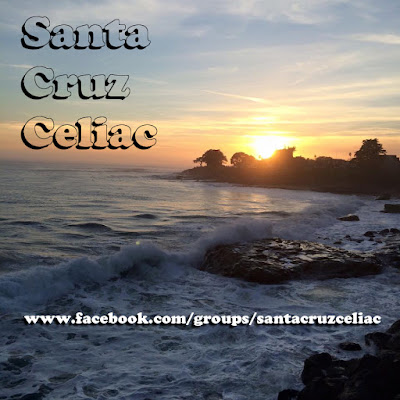 One of the hardest parts about leaving New York City and moving to California was leaving the NYC Celiac Meetup group. I led that group for more than a decade and many of the members became some of my best friends. I put endless hours into running that group, planning more than 300 events, and making newly diagnosed celiacs feel like they weren't alone in this gluten-filled world. I got so much out of running that group and I was sad to leave behind such a supportive community.

When I got to Santa Cruz, California, I discovered there had been two separate groups, one gluten-free group and one celiac support group. Sadly, neither group really met in person anymore nor did they know about each other. As a support group leader, I know how it feels to be burnt out. You work hard to plan plan plan and then you hope for people to show up to your events. When people don't show up, it's disappointing. When you've made reservations and have no-shows, it is embarrassing. Both of these women had been what I had been through in New York and seemed like they needed a break from their groups but were still interested. After meeting with both of them, I am hoping to join forces to revitalize the celiac disease support community and make an even bigger and better group in Santa Cruz County!

Community and support is such an important part of the celiac disease journey. I can't tell you how many people I've met over the years that tell me they felt lonely and like they were the only one in the world with celiac disease. They met just one person that they can talk about gluten-free with, and their whole perspective changes. They suddenly realize they are no longer alone and that someone understands EXACTLY what they are dealing with being on a medical gluten-free diet.

Given my own personal journey for a support community as well as the desire to help others, I created the Santa Cruz Celiac Facebook group. My plans with this group are to build both an online support system as well as coordinate in-person events for people in Santa Cruz and surrounding areas for people with celiac disease. If you or anyone you know will benefit this group, please feel free to join. In coming months, I will definitely host face-to-face events for the community. Thanks for sharing and hope to meet you all soon!